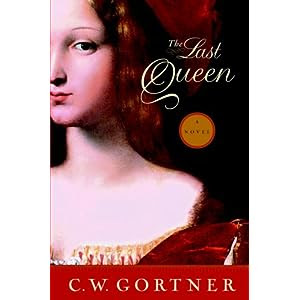 "Spanish Princess Juana, 13, watches as her parents, King Fernando and Queen Isabel, unite Spain, vanquish Moors and marry their children off to foreign kingdoms for favorable alliances: Princess Catalina becomes first wife to Henry VIII; Princess Juana, who narrates, is shipped off to marry Philip of Flanders, heir to the Hapsburg Empire. Although Juana balks at leaving Spain for the north and a husband she has never met, their instant chemistry soon turns to love. Years and children later, Juana unexpectedly becomes next in line to the Spanish crown and must carefully navigate every step of the journey from Flanders to Spain, fearful of alienating husband or parents or both. Emotional and political tensions soar as Juana’s loyalties are tested to their limits. Disturbing royal secrets and court manipulations wickedly twist this enthralling story, brilliantly told. "  Publishers Weekly

There were so many interesting events covered in this historical fiction that were absolutely riveting.  Unfortunately, the author also includes some things that I guess were meant to rev up the story, like some graphic sex that I could have done without.  I had never heard of Juana of Castile; and her life certainly contained a lot of tension and politcal maneuvering.  She gave birth to five children, several of whom she was forced to leave when she returned to Spain from Flanders.  There were some disturbing aspects to her story and it was amazing how little power she had as a ruling woman.  Apparently there are some unanswered questions and myths about Juana's life that the author created fictional answers to.  So I picked up some great historical tidbits which is always good, but found the story just so-so.  Rating:  3.5
Posted by Framed at 4:49 PM