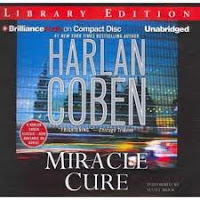 I've found that mysteries and thrillers are the best books to listen to while I'm driving to work and back each day.  This book was particularly compelling with its twists and turns.  I was quite far into the story before I began to suspect who the culprit was.  It's a good thing not to be able to solve the mystery too soon.   Here's a synopsis from the back of the book:

"They're one of the country's most telegnice couples:  beloved TV journalist Sara Lowell and New York's hottest basketball player Michael Silverman.  Their family and social connections tie them to the highest echelons of the political, medical, and sports worlds -- threads that will tangle them up in one of the most controversial  and deadly issues of our time.

In a clinic on Manhattan's Upper West Side, a doctor had dedicated his life to eradicating a divisive and devastating disease.  One by one, his patients are getting well.  One by one, they're being targeted by a serial killer.  And now Michael has been diagnosed with the disease.  There's only one cure but many ways to die . . ."

I find it interesting that the book cover does not spell out the name of the disease which is AIDS, but it was published in 1992 when the disease was much more controversial than it is today.  I also just read recently that they may have found a cure for AIDS which this book is all about.  The difference is that in 1992, so many people wanted to ignore AIDS because of its link to the gay community.    But, all that aside, the book is a great mystery, with a scary hit man and a surprising person who orders the hits.  I especially enjoyed the police detective who investigates the murders.  Max is a boyish-looking, Jewish, closet-gay man who hates violence, doesn't carry a gun, but is intellectually brilliant at putting the pieces together.  Great character.  While the book is dated (no cell phones), it is still a good read.  Rating:  4.5
Posted by Framed at 8:26 PM